Our youngest, Bonnie, had been to five festivals before her fifth birthday.
Due to our largish family, it was always cheaper to do a festi-hol, but by 2014 the elder ones had started to get jaded and wanted to do ‘normal’ holidays. We did like the masses and had a couple of short trips to Spain and a drive through Europe.
Then Camp Bestival announced Fat Boy Slim and Tears for Fears were headlining for 2016 and I couldn’t resist.
So here we are again, blazing sunshine, our trusty 20-year-old Japanese Bongo van and an awning propped on a windy hill in Dorset.
So far we’ve watched the kids make a den in the Dingly Dell, shoot crossbows with the Tudors, stuff their faces with posh ice-cream and organic salad (and chips) and enjoyed acts as eclectic as Turin Brakes and Mr Motivator.
Two days to go, so far, so good! 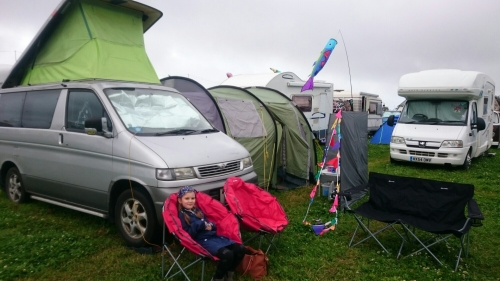