There’s a teen in the house: Y’get me?

MY little boy became a teenager this week. Scary, huh? Everyone tells you, when you have kids, how quickly time will pass. And how right they are.

That 13th birthday is a milestone. It may not really mean anything much legally – I think you can take on a paper-round and Facebook is no longer a no-go – but it’s the first tangible step out of childhood.

As well as having an embarrassing mother who puts embarrassing photos of you in the paper, Jed’s become unlucky by virtue of birth dates. His youngest brother, Billy, was born six days before his sixth birthday. He went from being the subject of unadulterated September celebrations to having to share the same week with someone younger.

Billy is still able to have a knees-up in the traditional manner, with the chaotic pass the parcel, cake and ten friends party, because he’s seven.

Jed gave up the ball-pit, bouncy castle and party-bag fun at the age of ten. It must be hard. What fuss is made when a boy turns 13? Nothing much. He’s chosen his present. He gets to choose where we go for a family meal to celebrate. He’s altogether underwhelmed with the whole birthday thing and has perfected that teenage ‘not-bothered’ shrug already.

There’s a famous parenting book from the 1970s which says you have to view teenage boys a little like babies rather than adults. For example, a 13-year old will forget all means of communication and you’ll need to do everything for them. A 14-year old will be frustrated at everything and everyone and throws tantrums, much like a toddler during the terrible twos. A 15-year old will try to push the boundaries and will argue with inanimate objects if there’s no adult around to appreciate their wisdom.

I’m pretty sure he’d hate me saying so, and God knows I don’t want to tempt fate, but so far, Jed’s been a pretty great, easy-going kid.

He’s had the pressure of being the eldest, with his next sibling very close in age, and the expectation that he should help out with everyone else. He’s good company, but has the advantage of a brother close in age so doesn’t feel he has to go knocking on doors to see friends. He cooks, he cleans (when nagged), but still leaves underpants and damp towels where they fall and argues about how unfair bedtime is every, single night.

He’s suddenly had a much-longed-for growth-spurt, and is now taller than his brother and both grandmothers, and almost as tall as me. He’s now enduring the hilarious voice-breaking stage, and can waver from sounding quite manly to literally squeaking the next. He’s cynical, exasperated with life and if he wasn’t disturbed, could sleep until noon. I know I’m biased, but he’s delightful. I wish I could give him everything he ever wants. I’m grateful that he still talks to me, and will even deign to give his old Ma a hug. How long this will last, well, only time will tell.

It seems an impossibly long time ago that I became a mum, and was handed that tiny, scrunched-up, red-faced baby boy, who is now on the cusp of becoming a man.

Happy 13th birthday Jed, oh, and don’t forget to pick up your laundry from the bedroom floor. . . 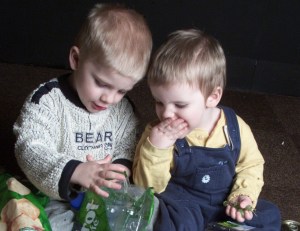 Jed and Doug, some years ago. Aww. 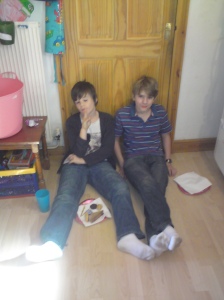 Sorry, poor quality pic but they hide when they see a camera now

One response to “There’s a teen in the house: Y’get me?”