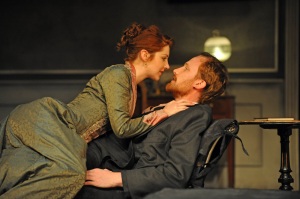 IT was an A Level text I’d managed to dodge as a teen. But plenty of English and Drama students will have read and seen Ibsen’s depressing masterpiece Hedda Gabler.
Running at Northampton’s Royal & Derngate as the final installment in artistic director Laurie Samsom’s Festival of Chaos trilogy, this is a stark departure from the larger-than-life offerings of The Bacchae and Blood Wedding.

A new, stripped-down cast of seven take to the beautifully lit, impressive but stark stage which stays static in the stifling drawing-room of the newly-wed Hedda, nee Gabler, now Mrs Tesman, in 1890s Oslo.

We’re introduced to her puppyish dolt of a husband, Jorgen (Jack Hawkins) and the obligitory overbearing aunt (Sue Wallace) while tutting servant Berte (Janice McKenzie), makes her mark with a scattering of lines.

The sets are muted and the dialogue conventional until the malevolently bored Hedda (an astonishing performance by Emma Hamilton) appears, displaying the nonchalant rudeness of the spoiled little rich girl. 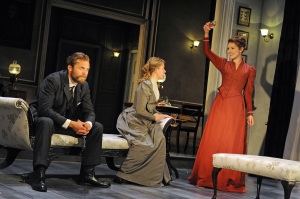 Utterly frustrated by the life she’s chosen and the status of women, and jealous as hell of the relationship between her alcoholic-tortured-artist-ex Lovborg (the marvellousoly monikered Lex Shrapnel) and a timid school-friend Thea (played with utter conviction by Matti Hougton), she sarcastically bullies and belittles all around her instead of seeking the freedom she incites in others.

Trapped not only by the loveless marriage and financial dependence on the slimy Judge Brack (Jay Villiers), but by impending motherhood, Hedda prowls cat-like around the stage setting traps and killing any hope of happiness or redemption, while always claiming to set the dark genius of Lovborg free “with vine leaves in his hair.”

A superb cast, pale and Nordic to contrast with Hedda’s flame-haired femme fatale, create tightly-would tension throughout the two and half hours, with little relief for an audience helplessly fixated on the impending doom.

It might not sound like a fun night out, but it is brilliant, provocative and engrossing theatre. And yes, I did jump in my seat. Again.