This is quite exciting. If you grew up with the Moomins – those quishy hippo-ish characters Moomintroll, Moominmama, Moominpapa and Little My – you can see them brought to life this weekend on the Royal and Derngate stage.

Using brilliant puppetry, live music and humour, Moominsummer Madness is another coup for the Northampton theatres, and is an innovative show ideal for ages four and upwards. A co-production between Royal & Derngate’s Underground Studio and London’s Polka Theatre, this world premiere is staged in the Underground Studio in Northampton from Thursday 22 May until Sunday 1 June.

The Moomins live in a fairytale land of Moomin Valley and have lots of adventures. Author Tove Jansson was a Scandinavian illustrator whose books and comic strips were eventually published all over the world, and like all good children’s literature, were a little bit surreal but based on ‘human’ scenarios. Moominsummer Madness forms part of Tove 100 – a celebration of 100 years since the birth  of one of the key artists and writers in the post-war age. Her Moomin books (written between 1945-1993) have been translated into 44 languages along with animated films and a popular television series

Moominsummer Madness finds the Moomins aboard a floating theatre after a huge flood sweeps through the valley. Mysterious things start to happen… Why is there a door in the floor? Why does the scenery start changing? And where do Moomintroll, Little My and Snork Maiden disappear to? The only way of bringing all the family back together, it seems, is to put on a play!

Local audiences have enjoyed many hugely successful shows for children and families over the years, created by Royal & Derngate’s Associate Director Dani Parr, including Flathampton and Along the Riverbank, and now she brings that trademark flare and interactivity to popular children’s storybook characters the Moomins. 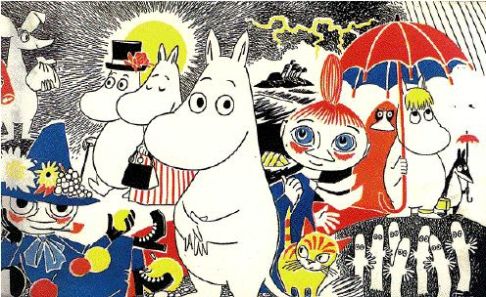 Moominsummer Madness can be seen in Royal & Derngate’s Underground Studio from Thursday 22 May to Sunday 1 June, before transferring to Polka Theatre in London. The first two days are exclusively for schools (tickets priced £9 each, with one ticket free with every 10 purchased). Tickets for family performances from Saturday 24 May to Sunday 1 June are £10* each. Times vary. Call Box Office on 01604 624811 or visit http://www.royalandderngate.co.uk to check times and book tickets.

On Friday 30 May there will be the opportunity for children aged from 8 to 15 to work with a professional puppeteer to bring a puppet character to life in one of two puppet-making workshops, running from 11am to 12.30pm and 1.30pm to 3pm. The cost is £5 per participant and places can be booked by calling Box Office.