Will the ‘princess stage’ inhibit my daughter’s ambition?

WE were reading a bedtime story about what Piggy Wiggy was going to be. The relative merits of employment as a doctor, firefighter, pilot and explorer were all debated.

Inevitably, I asked three-year-old Bonnie what she wanted to be when she grew up.

“A fairy princess,” she said, without hesitation.

“Yes, but when you aren’t being a fairy princess, what job would you like to do?”

“I’ll be a princess, and a fairy,” she explained slowly, as if I was slightly dim.

She hasn’t even seen all the films, but she knows who they all are. There’s Belle (Beauty and the Beast), Aurora (Sleeping Beauty), Tiana (the Princess and the Frog), Snow White, Jasmine (Aladdin), Mulan, Pocahontas, Ariel (The Little Mermaid) and Cinderella (who until the arrival of Rapunzel, was Bonnie’s favourite).

There are also the unofficial princesses, in the form of Alice (in Wonderland), Tinkerbell and even the very foxy Maid Marian from the animated classic Robin Hood.

People with daughters tell me that this is just a phase that all little girls go through, but I don’t remember this onslaught growing up. Apparently the Princess franchise was only dreamed up in 2000, because Disney sales were taking a dip.

Should we be worried though, if our daughters strive to be pretty and well-dressed rather than clever and brave?

Boys don’t get verbally judged every time an adult addresses them. They might get “little man” or “Tiger.” Girls will get told they’re pretty, or that their outfit or hair is gorgeous, and get called ‘Princess.’ None of this, of course, is deliberately intended to stereotype them, it’s just the way we talk to girls.

There are those who think its damaging to allow our daughters to even be exposed to Disney’s addictive Royalty. Girls might do better than boys in exams, but the amount of teens I’ve met who aspire to marry a footballer or claim they need plastic surgery before they’ve even finished growing shows the toxicity of the superficial.

How many teen girls you know could tell you who Marie Curie was, or what Karren Brady does other than appear on the Apprentice? But I bet they could probably tell you the colour Ariel’s hair and complete biographies of all the Kardashians.

I know a Dad of girls who banned any Disney princesses in the house because he didn’t want them to think that life was all about finding your prince and getting him up the aisle.

I also know a Dad who banned his sons from having toy guns or any ‘violent’ characters like Transformers (and his offspring are about the most aggressive children I’ve ever met).

It’s true that all our boys had their phases – dressing up as Spiderman for an entire month or imagining themselves as Transformers – it passed, although they all still have their Bart Simpson moments.

I don’t want to stop Bonnie enjoying her Princess phase. We just have to balance all that pink fairydom with exposure to other, less sparkly things too. She’s already leaning more towards Lara Croft, chasing her brothers around the garden dressed as Cinderella and brandishing an AK47 pump-action water pistol.

I have my limits. You won’t find a single Barbie in our house, not until she gains at least two stones and gets a PhD.

The dummy fairy may have a fight on her hands

WHILE I’m looking forward to our fourth child Bonnie’s third birthday later this month, I’m also getting worried. There’s going to be a fight.

The conflict is going to involve her dummy addiction.

Yes, yes, quieten down all you brilliant parents who refused your offspring the plasticy comfort of a dummy. I thought I’d be like you until about 24 hours after our eldest was born, when sleep deprivation and panic saw us run to the all-night garage to buy one. 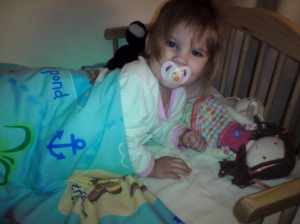 Not all our children had dummies. Dougie refused one, having found his thumb just days after birth . . . which he still sucks now at the age of 11.

Jed and Billy had dummies, but gave them up without much fuss on their third birthdays.

And herein lies the problem. On Bonnie’s birthday, she’ll be expected to give up her dummies to the Dummy Fairy, who collects them from beneath pillows to give to newborn babies who need them more than three-year-olds. And she’s not up for the idea AT ALL, despite the promise of payment/presents.

Bonnie never wanted a dummy for day-time, just for bedtime and car journeys. But since I told her that when she’s officially A Grown-Up Girl, the dummies have to go, she’s become stubbornly attached to them. Tantrums usually end up with her demanding one (and go on for ages when she’s told ‘no’). Her behaviour in the car is completely dictated by whether there’s a dummy available. I’ve tried withdrawal, but I’m just too tired, impatient and weak-willed to try to beat the looming birthday deadline.

Are girls more stubborn than boys, or is this just an inevitable stand-off between the females of the house?