OUR summer holiday was at Camp Bestival, a family festival at Lulworth Castle in Dorset.

Calvin Harris is in there somewhere

We’ve been to three festivals and they are about camping, rain and, um, obviously, the music.

There was a lot of music that had to entertain a range of ages, but with artists like Madness, the Human League, Calvin Harris and Friendly Fires, we were in for a treat.

On Friday, after watching Mum and Dad fight with the campervan tent, we made it to see new-on-the scene rapper Tinie Tempah. After being 45 minutes late he really got the crowd joining in, but he kept going on about buying his album. Could have been longer but I don’t think he was into it. Mum and Dad got quite excited about the Fall who were up next. Good tunes, didn’t like his voice. Marc Almond was on while we were on the wander, but at least we all knew Tainted Love. Really liked DJs Yoda and Mistajam.

As we explored the rest of the festival, we heard a fantastic noise coming from a small red spotted tent; a mixture of fiddles, guitars and drums creating a unique sound. This was the Polka Tent and it just made you want to jump up and down. We returned many times over the weekend.

I’d never heard of George Clinton and Parliament Funkadelic but recognised the, well, funky songs they performed on the main stage. Gutted that we couldn’t wait up to watch Tim Minchin in the comedy tent, but we did have our baby sister and younger brother with us, and we were back at camp before it rained.

Saturday brought a whole new range of talent after the disappointing appearance of the Gruffalo. (Boring when you are at the back of a field full of pushy parents). 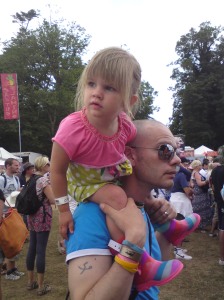 Hang on Dad, I think that was Hugh Fernley-Whatsit

Ellie Goulding performed although personally I thought quite a lot of it sounded like the same song. Later that night a massive crowd appeared. It was Madness, literally. The field was full of 30-40 year olds. Getting squished by sweaty middle aged men made us cringe, so we moved and ended up watching between a crack between the castle and trees. Some was good, but the middle was stuff no-one seemed to know.

Sunday was the day for music. We watched a new band in the morning called the Sound of Rum, who were brilliant, with a female rapper and fast, funky tunes.

At teatime we found a good spot nearer the main stage to watch dance music master Calvin Harris who got the crowd singing and we were all jumping about. He was looking like he was having fun and did nine tracks, and could have gone on later.

Next up the Human League, who received two encores from the field of nostalgic parents. We had been interested to see Bill Drummond and the 17 who had been recording voices to make a make an almighty sound. But it was just short, and weird.

Friendly Fires, who are amazing musicians, performed in the lead up to the firework finale rounding off excellent music at an excellent festival.

Even if we did have to watch our parents dancing.

Jed. Too cool for photos