Would you give your 11-year-old a mobile phone?

GOING through the holiday snaps stored on various cameras I noticed a theme: Dougie is playing with his mobile phone in almost every photograph.

This was to be expected. Giving an 11-year old his first mobile phone and then not letting him fiddle with it for the next month is like giving a puppy a chew toy he can’t bite.

If, like us, you are taking the plunge and getting your pre-teen a phone as secondary school and new independence looms, then don’t leave it until September. Get it now and they’ve got the rest of the holiday for the novelty to wear off.

There’s legitimate research that says children shouldn’t be holding mobiles to their ears as their brains are still growing, and they are more susceptible to the radiation emitted.

There’s also fears of them being more open to mugging, bullying and generally spending too much of their time and our money. We parents can argue that we grew up fine without mobiles, but we also grew up with smoke-filled homes and no seat belts in our cars.

We need to accept that times have changed, and mobile phones are both a noisy, expensive curse and an utterly brilliant way of keeping tabs on our children.

Trust me: that phone isn’t really for him, it’s for us. 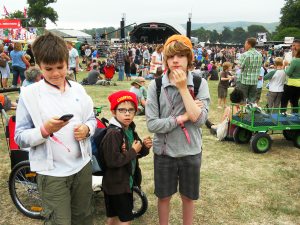 Festival not as exciting as my phone

Last year we went through the whole hand-wringing over mobiles with our eldest son before he went to secondary school.

Back then, a whole 12 months ago, it was easy to buy a bog-standard, no-one-would-want-to-nick-it model, which Jed bored of quite quickly and only uses to write illegible texts to his friends on. I pay £10 a month for credit on a pay-and-go basis– no negotiation – after advice not to sign a kid up to a contract. Getting a free texts/limited calls sim card is advisable, as they won’t spend much time talking on it.

However, phones have come a long way in a very short time. They are far more sophisticated, and even getting a cheap one meant touch-screens, android technology and social networking built in. It’s a job to even work out how to actually make a phone call on the blinkin’ thing.

Much to the annoyance of Bloke and I, Doug’s bargain phone is better than our contract ones. And no, we are not going to join the herd and hand over any money to Apple. Iphones are so last year.

Dougie is a techno fiend. Within minutes of its first battery charge he’d entered all his mates’ numbers, sent us all texts, downloaded a game, set his ringtone and transferred all his music files. I fear the novelty may never wear off.

I’ve already wrenched it from his sticky mitts, usually when he’s engrossed and ignoring everything around him, like walking into the road. I need to stem his addiction now before he gets it confiscated during his first week of school.

After all, it’s no good to me as a tracking device if it’s in a teacher’s drawer. . .

4 responses to “Would you give your 11-year-old a mobile phone?”