‘Bring me a Minion!’ (and a cinema booster seat) 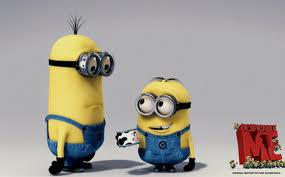 WE don’t get to the cinema that much as a family, due to Bonnie’s refusal to sit still for more than a few minutes unless Peppa Pig is on screen.

However, after much nagging by the boys, over half-term we went to see the new animation Despicable Me at Cineworld. (Billy and Bonnie have trouble pronouncing ‘despicable.’ So of course, we make them say it as much as possible.)

We have two cinemas in town but tend to always go to the older one at Sixfields, because the parking is so much better and the staff are good. But their top-brass could do with bunging some money at the tired old loos. Yuk.

If you have small people with you at the cinema, make sure you grab a plastic ‘booster’ seat on the way in. It prevents you having to fish out your distressed and doubled-over offspring from the innards of the folding seats when their bottoms inevitably fall through the gap.

The film was great, thanks mostly to the Minions, an army of little yellow pill-shaped workers whose toilet humour and sniggering noises made the kids belly-laugh every time they were on screen.

Without becoming Disney-sentimental, it is a poignant and hilariously funny depiction of the modern family, and for once, little girls are the heroes.

We chose the 2D version over the ubiquitous 3D showing, because Bonnie just won’t wear the ill-fitting glasses.

Usually avoiding 3D makes little difference, but when the credits rolled, there was obviously an amazing spell of visual brilliance with the minions (who have names like Mark, Phil, Stuart and Dave) popping out of the screen towards the audience. So if you get a chance to go, it might be worth the battle with the specs.

As we were leaving, Bonnie said: “Mummy, my have min-yin.” (Translation: Mother, get me a minion, now.”)

And while I’m sure she’ll want plenty of minions running about after her when she’s older, for now a toy minion has shot to the top of her letter to Father Christmas.

Let’s just hope he can track down somewhere that actually has them in stock. . .anyone. . ?

One response to “‘Bring me a Minion!’ (and a cinema booster seat)”