Why has Halloween become the acceptable face of begging?

YOU’LL probably think me a party pooper, but I can’t stand Halloween.

Really, it’s not a ‘holiday.’ It’s an excuse to bleed for cash out of parents. You don’t even get a Bank Holiday out of it. It’s basically a celebration of expensive but cheap dressing-up outfits and even cheaper sweets.

But of course, the kids love it. They’ve seen the American films and TV shows that show Halloween as a great big sweetie filled night of pure joy, where their parents don’t just let them join in, they join in themselves. Bah. Maybe in America, but not in my universe.

Yes, yes, I know there are all sorts of ‘proper’ UK traditions involving October 31. It should relate to harvest and the changing of the seasons, and in Scotland and Ireland they make you dance a little jig or recite a poem to earn your fist-full of Haribo, but still . . . bah!

Our Boys will testify, I’m a completely stubborn misery guts over Halloween.

Over the years they’ve all tried to persuade me that Trick-or-Treating is normal, and that I should let them wander the streets of Semilong begging for confectionery or threatening householders. It doesn’t work.

The few times we have ever foolishly opened our door, all we’ve been faced with is a couple of pubescent boys with their hoods up and the usual pallid complexion of someone who spent the entire summer in a darkened room on the Xbox.

But what the hell has happened this year? 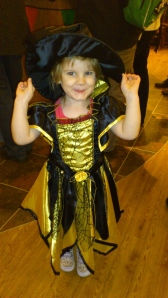 Not only did we accidentally end up at Alton Towers over half term during ‘Scarefest’ (most of the screaming came from Bloke on a tiny rollercoaster), but Bonnie was given a witch’s costume, Billy became a Vampire, and the kids were invited to three Halloween parties in as many days. Argh!

There’s one concession I do make for Halloween, and that’s growing pumpkins. But as they take five months to grow, you do have to remember to plant the seeds back in sunny May or June to get them to a decent size.

I don’t grow them to eat – there’s a reason the American’s add a tonne of sugar and fat to make pumpkin pie – I grow them so the offspring can watch while I unskilfully butcher a face into them. Then they can light them in the kitchen until the smell of singed vegetables becomes too much to bear. (Putting them in sight of your front door only encourages the door-steppers).

Nope. I’m still not swayed to embrace my inner ghoul and pester the neighbours.

By the time you read this Halloween will be all over for another year. And I can start being a miserable witch about standing in the cold and rain at Bonfire Night celebrations instead. . .