IT’S a phone call any parent would dread – “Now don’t panic, but [insert your child’s name here] has had an accident and we’ve called an ambulance . . .”

This happened to us for the first time this weekend.

It was the usual Sunday morning of rugby – which can either mean everyone at their home ground training or scattered around the county at different games.

Bloke had left early to take Billy to Corby for an under-eights game, I’d dropped Dougie at one club for an under-13s home game, while Jed cadged a lift with a team-mate to another town ground for an under-14s match.

Rugby is Bloke’s domain; I opt out of rugby when possible, in theory because I’m the taxi-driver for everything else, but in reality there’s usually a massive pile of washing to clear before the next heap of filthy kit arrives beside the machine.

Bonnie and I had just got home from a supermarket run. Then my mobile rang; an unrecognised number. It was our friend and fellow rugby mum, Kim.

“Now don’t panic, but can you get down here right away? It’s all fine, but Jed’s had an accident, and he’s OK, but we’ve called an ambulance . . .”

The old cliché of your blood running cold is truly accurate.

Within about four minutes I’d got Bonnie back into her shoes and coat, out to the car and strapped into her seat, and we were racing across Northampton.

Of course every light turned red as we got to it. Every slow driver pulled out in front of us, giving extra time for my mind to race.

He wasn’t knocked unconscious; we’d established that much on the phone. But what had happened? How badly injured was he? They said they weren’t moving him . . . did that mean a neck injury? What if we missed the ambulance going the other way to hospital? What if we didn’t get there in time? In time for what? How bad was it going to be?

I considered putting my hazard lights on, running red lights, overtaking, but I needed to get to him in one piece. And I had Bonnie in the car too. Don’t be stupid Hilary, just get there. Get to him.

Then it occurred to me to ring Bloke. What should I say? He was even further away. And what about Doug, who would need picking up from elsewhere?

When we got to the Casuals RFC ground in Bedford Road, there was no ambulance, but fellow parents were waiting to show me where Jed was. I parked – badly – passed a bewildered Bonnie over to Kim’s brilliantly responsible teenage daughter, and started running to the farthest corner of the fields where I could just make out a shape on the floor surrounded by adults.

At this point my adrenaline ran out and utter, disgusting, chubby unfitness took over. I got halfway across the muddy second pitch and couldn’t breathe, let alone run. I turned to see the ambulance coming in the gates and got to Jed just before it did.

He was on the wet pitch where he’d fallen, covered in coats, tops – anything anyone could donate to keep him warm – in shock and some pain, with his excellent coach holding his head still. Everyone was clearly concerned.

He’s a scrum-half. He’d been in a heavy tackle, fallen sideways and landed heavily on his back. After the impact his legs had gone numb with pins-and-needles, and his back was agony. He’d been told in no uncertain terms, quite rightly, not to move.

The two ambulance women quickly established he didn’t have a neck injury, and got him onto a stretcher and into the ambulance where he was given gas and air for the pain.

Everyone at the club had rallied around, taking care of Bonnie, kit bags and the car while I went in the ambulance.

Meanwhile Bloke had arrived back in Northampton, gone to fetch Dougie, and was on his way to retrieve Bonnie and everything else before coming to the hospital.

In A&E, we were admitted quickly. Jed had to part with the gas and air, which he’d clearly become attached to, and had been given strong painkillers instead. He wasn’t talking much, mostly from shock.

We were seen quickly by a nurse, then a doctor, and the diagnosis was that he probably hadn’t broken any bones, but had possibly torn muscles in his lower back. They seemed most relieved he hadn’t broken any ribs.

We were dispatched within an hour of arriving with three sets of strong painkillers and advice not to play sport until he recovered fully. 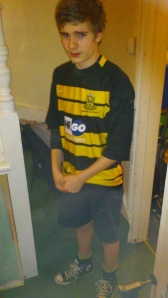 Jed before Sunday's drama. And no those aren't his rugby boots.

Jed felt relief, shock, and utter disappointment that he hadn’t been able to play the match and probably wouldn’t be playing for a while either. He was also embarrassed about the whole ‘taken off in an ambulance’ thing. Word had quickly spread and his phone was pinging all day with concerned messages from his friends.

Meanwhile I felt, and still feel, massive, overwhelming relief that it hadn’t been worse. A boy I’d grown up with had died in his teens playing school rugby in a freak accident. Plenty of other people suffer life-changing sports injuries and thank goodness Jed wasn’t one of them . . . this time.

Part of me is screaming: don’t ever let any of them on a rugby pitch again! But I know I can’t, and shouldn’t, stop them, any more than we can stop them ever crossing the road or getting in a car. Normal life carries risks.

Huge massive thanks to all at Casuals RFU who went out of their way to help and to the ambulance and hospital staff who mop up these kinds of sports injuries every weekend.