The Girl is Four 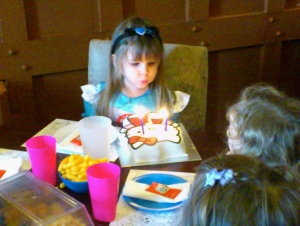 THE Girl is Four. It seemed a straightforward enough caption for a picture posted on my rarely visited Facebook page, but I didn’t expect quite as much incredulity.

Yes, four years ago I wrote in these pages about the new arrival to the family, The Girl: Bonnie, a surprise to us all after three beloved and boisterous boys.

Looking back at the photos scattered around various hard-drives, memory sticks and cloud sharing sites (it would have been far easier if I’d printed some), you see that four years is quite a long time.

For the first year she was a laid-back, compliant baby (well, as much as a baby can be), and now, well, she pretty much refuses to do anything she’s asked unless it’s on her terms.

I did congratulate myself on her fourth birthday because I wasn’t pregnant, nor had I been delivered of another baby in the previous four years.

We’re well past the milestones that all you new parents will be facing: the endless nappies, night-feeds, weaning, walking, talking, potty-training and (most of the time) tantrums.

Birthdays have been developmental stages too.

The first birthday is for the relatives and the one-year-old is fairly baffled by the whole palaver. The second birthday might see more relatives and friends in attendance, and Bonnie’s third was the first time she had friends over. Two of her pals came to our house for games, dressing-up and cake.

The fourth birthday was the first ‘outside catering do’ as we took Bonnie and ten friends to the Wacky Warehouse and let them all go bonkers in the ball pit for a couple of hours. They had a brilliant time.

At four, she’s now fairly independent – wanting to dress herself, take herself to the loo, write her name, count to 20, walk without holding your hand and tell you in no uncertain terms that “I can DO it!”

Yes, she’s utterly unself-conscious about singing loudly and without any discernible tune, and will dance in a shopping aisle if the opportunity arises. But she’ll also hide behind you and be shy with strangers, and jump on your lap if something is ‘scary’ (which at the moment seems to be everything from polystyrene dinosaur bones to bedtime).

When I carry her to the loo half-asleep at midnight each night, it always startles me how much she’s grown, from the tiny baby who could nestle into the crook of one arm to the girl who rests her head on my shoulder while her feet dangle at my knees.

She’s ready to start school in September which will be another milestone for both of us, especially for me as I know there isn’t another baby coming up behind to distract me.

Inevitably, she’ll always be my baby, but not because she’s the youngest. I look at all four of them and think exactly the same thing.  But don’t tell them I said that . . .