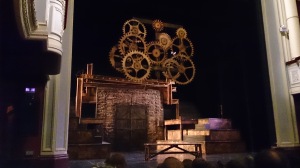 IT might have been the hottest day of the year outside, but the audience at Northampton’s Royal Theatre were enjoying something very cool on stage in the form of His Dark Materials – based on the brilliant trilogy of books by Phillip Pullman.

This was not a conventional night for theatre-goers. The evening performance on Saturday was Part 2, and surely everyone there had been to Part 1 either earlier in the day. (Or earlier in the week). So if you’d booked the Saturday it was a marathon session of viewing starting at 2.30, breaking at 5-ish and back for Part 2 at 7.30. If you hadn’t read the books or at least seen the DVD of the Golden Compass, the shows could have been baffling to follow too, as the books have detailed plots.

The show, with amazing puppets and puppeteers, an incredible set and 50 performers, was also entirely cast with under 21-year-olds – the companies of Royal & Derngate’s contemporary and classic theatre schools.

You’d hardly have known. The performances, especially of lead Demi Rixon as Lyra, tirelessly tearing around the stage as her character does in the books. Other notables were Ryan Leder’s armoured bear Iorek Byrinson and the witch Serafina Pekkala (Emma Cranston). Credible performances too from Will (Chris Normington), Mrs Coulter (Erica Tomlin), Lord Asriel (Luke Nunn) and the scene stealing Angels.

There were fights, huge scenes with Les Miserables-sized casts on stage at once, and it flowed beautifully. The daemons, played throughout by cast members visibly moving and voicing these exquisite puppets, were a touch of genius.

You have to hand it to the teens who were working the puppets, often on hands and knees or stooping for long periods – certainly youngsters were going to do this far better than adults with rickety joints.

There were the expected issues with such a huge cast of nervous new teen performers, rather too much mumbling throughout from some characters meant dialogue was hard to hear in places (voice training and projection possibly tricky with so many performers). But the strength of direction (Natalie Diddams and Chris Gorry certainly deserved the standing ovation as much as the actors) and the tech and staging professionals helped this be so much more than an amateur production.

A gamble by Royal & Derngate to stage such a huge production? It was truly brave and ambitious, and they totally pulled it off.