Oh no, not snow! Review Royal and Derngate, Northampton 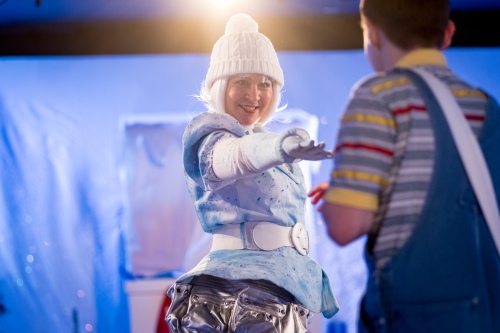 THERE’S a bunch of four and five-year-olds running up and down the steps in the bar area of Royal & Derngate, completely oblivious to everyone around them. The game escalates quite quickly into Slide-Down-The-Steps-On-Your-Tummy.
Oh, and they are all girls, most dressed in very sparkly dresses.
Our seven-year-old Bonnie has settled herself up onto a bar stool and is looking down on them, literally, while shaking her head: “Ah, reception kids,” she sighs, sounding more like a pensioner than her own grandparents. She’s read the blurb about the show we’re waiting to see and seen that it’s for under-fives – and she’s seven.
We’re here, Bonn and I, to see one of the Royal & Derngate’s famous ‘immersive’ shows for children. These are often linked to the Royal’s annual Christmas show and this year it’s Oh no, not snow! which references The Snow Queen, playing to rather larger audiences upstairs.
Oh No, not snow! (which will become ONNS for the purposes of word count) is being held in the Underground at R&D, an innovative space that allows directors to make sets as ‘rooms’ which the audience can walk through as part of the show.
The story has already started as the audience of kids and carers walk through to put away their coats. Sam (played by Max Gallagher) introduces himself and gets the smaller members of the audience to rip up paper to make snow.
Then his mum arrives and tells him to take his ‘friends’ (that’s us) to help tidy his bedroom.
What follows is a journey through a couple of self-contained rooms (I don’t want to spoil the surprise with too much detail, but there is a ‘wow’ moment) with the audience of parents and pre-schoolers in tow.
Director Chris Elmer-Gorry has created a delightful introduction to the fantasy world of theatre for the under-fives in ONNS, and I think it’s a real strength of R&D that they create these ‘tasters’ of theatre for the very young. 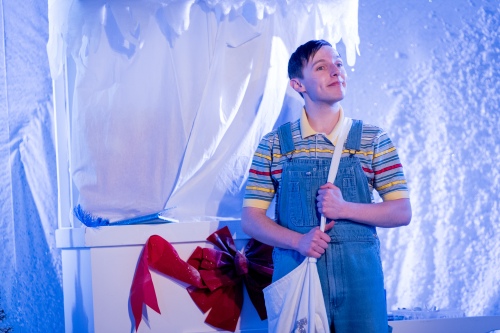 There are moments where the tiniest tots, oblivious to the fact there is a story being told, get involved in the action, and the actors, particularly Kate Hearn as Polly, do well to manage and ad-lib around their impromptu cast members. Sometimes the children are invited to help the cast in certain tasks, and sometimes they just join in anyway, and it’s up to the skill of the performer to manage the situation without breaking the flow, as there’s already no ‘fourth wall’ of traditional theatre.
I’ve reviewed several of these immersive shows over recent years and in this case Bonnie, aged 7, was totally engrossed in the action and the story.
There are a couple of songs that went on marginally too long for some of the kids, who I watched chucking ‘snow’ in strangers faces instead. I think the age of the children, set at under 5, could go up to six or seven, but I’d also put a limit on the number of adults coming with each child, because at times it seemed that there were just too many big people in the room closely stalking their offspring, rather than sitting back and letting them join in the action with the other children.
Oh No, Not Snow runs in Derngate’s Underground until January 3, with limited tickets available from the Box Office on 01604 624811.