Review: Wind in the Willows, Royal and Derngate, Northampton 2013 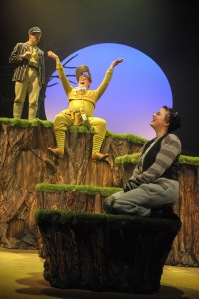 Wind in the Willows, Northampton Royal, 2013, pic by Robert Day

Clearly her visit to Royal & Derngate to watch Wind in the Willows had quite an effect. Every family discussion for the past few days has involved a reference to action from the show, including “the weasels were naughty” or “Dad wears a hat like Ratty.”

Royal & Derngate has two Christmas shows on offer each year, the traditional sparkly, generic panto in Derngate (Sleeping Beauty) and in the Royal, the Wind in the Willows, a lovingly hand-made, in-house production based on the book by Kenneth Grahame.

Before the show even started there was added drama – the original Mr Toad, Jack Edwards, had fallen down some stairs and literally broken a limb before the opening night.

Substitute Mr Toad, Gavin Spokes, had just two days to rehearse the leading amphibian role, including all lines, songs, moves, dances and props in a very physical show. But he did so (sorry Jack), with aplomb.

It might seem odd to start by commending the set and staging, but the work done by designer Sara Perks and her team really steals the show. The Royal has a small stage but the stage design with rotating turntable had grassy hillocks rolling past the riverbanks, layers and layers of Toad Hall, the Wild Wood, the Prison and Courtroom, all moving incredibly quickly and dynamically, with the cast jumping, rolling, diving and climbing over staging and props throughout. It was exhausting just watching them. And then there were the bubbles, and the real snow falling on the audience too, and the clever costumes . . . all crafted by the Royal’s talented team.

The ensemble acting as caravans, cars and horses with impeccable comedic timing only added to the action.

Ratty (Christopher Harper) and Mole (Katy Phipps) are an endearing pair from the off, trying to keep the rambunctious and spoiled Toad from harming himself and those around him as he races from one fad to another.

His downfall comes in the shape of a motorcar, cleverly ‘played’ using members of the ensemble making funny noises.

Outstanding performances from all the leads, and the children’s cast (parents, acting as a daily taxi service, I feel your pain) plus a showstealer from Jennie Dale as the Judge – what a voice!

Wind in the Willows, thanks to Gary Sefton’s direction, is a must-see, bringing a fusty children’s classic to life for a new generation. Tickets are available for shows until the run ends on January 5.

A direct hit for Wind in The Willows. Next year’s show has already been announced: it’s Merlin! 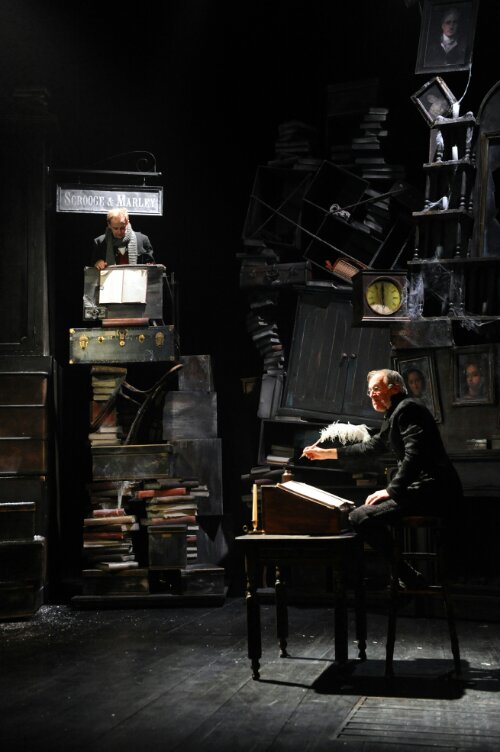 Four-year-old daughter settled into her theatre seat and made a pronouncement: “Ooh, this looks a bit too scary for me.”
This was before the curtain had even gone up.
Admittedly, it was a scary black curtain, which rose to show a classic Victorian street scene – only with the added brilliance of the Royal set-makers; boxes piled on boxes, upon bookcases and grandfather clocks. All moveable mini sets which characters could climb and peer through.

A Christmas Carol has been going down a storm at Northampton’s Royal & Derngate this year, and rightly so. I haven’t heard a bad word about 2012’s in-house offering – a welcome antidote to the giant celebrity-studded Bobby Davro/Denise Loose-women omnipanto next door in Derngate.
Pantomime it ain’t. The show sticks to the original Dickens classic story pretty religiously and that’s to its credit; there’s no soft-soaping of the Victorian urban setting here. Poverty, cold and Scrooge (played to miserly perfection by the considerably younger Sam Graham), grumbles and snarls his way around Christmas Eve like there’s no tomorrow, and of course, for him there might not be.
Cue the three ghosts – the Santa-like Andy Williams gives a show-stealing turn as the ghost of Christmas present as well as Jacob Marley – and Scrooge has to clean up his act for the sake of poor old’ Tiny Tim and the Cratchetts.
The cast are marvellous, and combined with a slick script and that mesmerising set, it’s a set of ingredients which leaves the audience feeling full and contented. Even the four-year-olds. 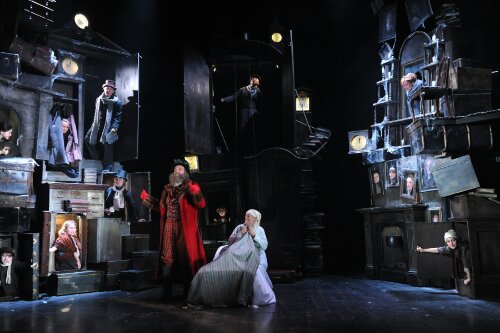 If you manage to get a ticket, do try to see it before the run ends on January 6. Box office is on 01604 624811.
I can’t guarantee any celebrity spotting on the way out though. Our Bloke saw Philip Schofield as we were leaving, although none of us – bah humbug – believed him. Turns out he was watching his brother-in-law play Scrooge.