A beginner gardener’s guide to failure 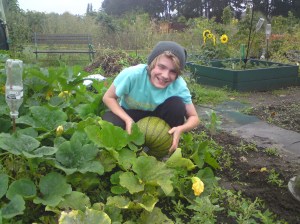 I’d like to give you a reassuring back-slap if this has been your first year as a gardener. It’s not you, it’s been, er, unusual.

Did you spend your bank holiday reviewing your successes and failures objectively? Or wringing your hands and feeling like it was a complete waste of time? Cut yourself some slack – you’re new at this, it’s been a bone-dry season, and hey, there’s always next year.

I’m pretty sure if this beginner is you, you’ll have mixed emotions about your first foray into green-fingeredness.

I expect you will have grown a few things that really, really make you proud of yourself: a few spuds? Some peas or beans? Tomatoes?

Or maybe you spent rather too much money at the garden centre back in spring and have watched as some of your floral purchases have responded to your tender-loving-care by tripling in size, and providing blooms for months. While others, perhaps, lasted as long as a footballer’s fidelity.

If you took the vegetable route when you decided all those months ago that you’d quite like to grow stuff, then 2010 might have had mixed results.

On the one hand, you won’t have had half as many weeds and slugs to deal with as in previous, wet summers. Lettuces and potatoes have cropped well, without being scoffed by the usual slimy things. On the other, the things you’ve grown will have needed daily watering and probably bolted into seed as soon as your back was turned (refilling those watering cans, no doubt).

Hopefully enough things will have gone right to fuel your enthusiasm to start all over again next year.

My firm favourites are, naturally, the things that I manage to get to work each year without too much effort on my part. In the flower garden, that’s the roses (not too much aphid damage or blackspot this year), many hardy geraniums and ferns (which like my shady plot). Well-established delphiniums, two year old echinacea, deeply-planted bulbs which have avoided spade slicing and clematis which just go on giving.

At the allotment, it’s a more hands-on approach. Strawberries, blackcurrants and gooseberries have been abundant. The raspberries and recently-transplanted apple tree have been disappointing. But they can be left in over winter to try again next year.

The vegetables that don’t work are more tricky. There’s more wasted man-hours involved. You have to sow it at the right time, pot them on properly, plant them out early enough for them to be productive without killing them with frost. If you don’t eat a lot of something, don’t grow it.

Winners in my personal allotment show have been onions, garlic and shallots sown last autumn, one variety of potato (Sarpo Mira good – Blue Danube poor), and for the first time, tomatoes grown without blight and with enough sunshine. I’ve got more sweetcorn this year than before, which is satisfying. Every new gardener should grow curcubits: courgettes, squashes, pumpkins, marrows and cucumbers. They are the plant that keeps on giving. Hell, you might even start to like eating them.

And those pumpkins can hide the weedy ground and give you something to attempt to carve into a face in two-months-time.