Time to tuck up toms?

HOME-GROWN outdoor tomatoes have been fab this year, and just as we’re getting a last blast of sunshine, it’s probably time to think about bring them indoors.
A couple of beginner gardener mates have been stressing about their toms, having read that they won’t ripen further.
Actually, they might, given the sunny day, and you should remove any faded leaves or those that are shading the fruit.But it’s the night temperatures which could get them. Clear cloudless nights mean cold, and it dipped to just 3 degrees at the end of last week. 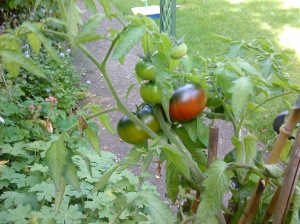 To save them from the compost heap, you can cut a whole truss of green tomatoes off the plant and bring them indoors. Put them in your fruit bowl, or in a bag with a ripening banana, and they will, eventually, turn red.

Don’t put them in the fridge as that’s just the same as leaving them outside in the cold – it just stops them in their tracks.

You can still use green tomatoes for chutney (cooking and adding sugar and some riper red ‘uns is the trick) or just chop them up as part of a tray of roasted vegetables with a sprinkle of chilli. Yum.