What’s more British than queuing in the rain? You won’t get me with your jubilee guilt

There are some marvellous mothers out there in Parentworld. Ones who don’t leave their offspring to get their own breakfast on a Saturday just so they can lie in. Ones who remember to do packed lunches and pick up their children from sports clubs on time.

There are Mums who during the past week have organised street parties, decorated their houses, made Union Jack dressing-up outfits and cooked red, white and blue cupcakes. Ones who remember fondly their own jubilee experience circa 1977.

I’m not one of them.

My only memory of the Silver Jubilee, aged seven, is confused. I think I remember my primary school playground in deepest darkest Devon, on a sunny day, with trestle tables, been given a souvenir mug. But then I also think I’ve seen a photo of that day. Do I remember the event or the photo?

Anyhow, lots of people were saying that we had to do something for the children to remember the 60th jubilee. Thankfully school and nursery had designated Friday as a dress-up and eat picnics type-of day so all we had to do was supply the regal dress-up and some Marmite. Yes, Billy took Marmite. 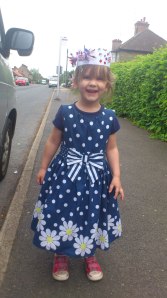 No perfect crepe paper and cardboard creations in our house I’m afraid. My mother’s talents have clearly skipped a generation. Bonnie wore a blue and white frock with red leggings, and we just about persuaded Billy into some kind of jeans and cape ensemble.

Then on the Sunday, when we’d committed everyone (“we’re going, and that’s final”) to the Delapre Park Jubliee Picnic in Northampton, it peed down all day. Nevertheless, we dragged everyone out on coats and wellies to ‘have a drive around’ with a promise of a fast-food  lunch. Broke that promise by queuing for the Delapre Abbey Cafe and only lifted their spirits by paying £2 for each them to hit a fairground-style test-your-strength-ring-bell thingy and ‘win’ an inflatable hammer. 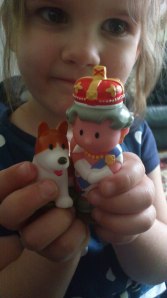 Home to catch the capital’s chaos on TV for the rest of the bank holiday while two of the kids developed stomach bugs. God only knows how the Queen managed to stay sane, poor woman.