We went to the Olympics already, oh yes we did.

LOTS of love for the Olympics eh? Us cynical old Brits might have been moaning about the fuss, the expense and the disastrous ticketing, but now the medals have started to come in for Team GB, we’re hooked.

We got back from a festival in Dorset in the early hours of Monday and on Tuesday were en-route to the Olympics in London. I’d tried to get tickets twice unsuccessfully but it was third time lucky as we booked four (the maximum allowed) to the first round of women’s hockey. Not so bad as our eldest son is hockey mad, taking himself off on the bus to Moulton each Saturday morning to start training at 9am.

Bloke had already offered to spend the day with our daughter Bonnie, 4, at his Mum’s in Letchworth, and our matches were in the evening session starting at 7pm.

So we got the train (pre-booked tickets, and a free London Travelcard came with the Olympic tickets)  at lunchtime and were surprised at how quiet the well-staffed King’s Cross Station was.

Then we walked around in a big circle trying to find the Javelin train which goes direct to the Olympic Park. It started to rain, and then we saw the sign saying the train was out-of-action.

A bloke on the gate told us there was already an hour’s wait for the next Javelin so we took the ‘normal’ tube to Liverpool Street and then Stratford. Then the wave of spectators hit us, just at the entrance to the Westfield Shopping Centre. It was heaving. I’d mistakenly thought it was wise to try and use the loos in the centre before queuing to get into the Olympic Park. Not so.

We were eventually funnelled into the park where there were few queues for the airport-style security checks. All the staff were very friendly with just the faintest and strangely welcoming hint of British sarcasm with each ‘have a nice day’. You can only take in a single rucksack per person, which gets put through a scanner along with your coat and pocket contents.

Once in the Olympic Park there’s an air of theme park impressiveness; you are actually there. The stadium is huge and while not yet open, you can see how fabulous it’s going to be when the athletics events start.

Being with three sons, their priority was to find ‘the world’s biggest MacDonalds. But on the way eight-year-old Billy, who is a little obsessed with ‘collecting stuff’ (football cards etc), temporarily distracted us into a Cola-branded ‘pin-swap shop’. Pins are enamel badges with (I didn’t realise) are sold and swapped at each Olympics. There are tonnes of them, and Billy wanted to spend his pocket money on a 2012 lanyard and two £5 badges. After a LONG time choosing we got to the till to find all the £5 and £6 pins were sold out. ON DAY THREE!

He bought one for £7, a Cola branded one which barely mentions the games, and on the way out a kindly American ‘swap’ man, with hundreds of pins to trade, actually gave Billy a mascot pin from the 1996 Atlanta Games – FOR FREE! What a nice chap.

Our quest for the fast-food megastore was confusing. We found the huge burger bar but you couldn’t sit inside. Only on one of dozens of parasoled wooden picnic tables, all which were occupied. We perched on the end of one until the occupants got fed up and made room.

The architecture is amazing, and the telly doesn’t do it justice. The red ‘Orbit’ sculpture 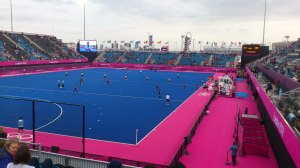 The corporate branding everywhere is overwhelming. We dodged the EDF energy pimps trying to entice us into their cinema, and couldn’t be bothered to wait 40 minutes in the queue for the BP ‘free photo by the stadium’ when we could just take our own.

I couldn’t get the promised free Wi-Fi to work so Tweeted rather than blogged, and by the time we got to the Riverside Stadium, hosting the hockey, I was virtually out of phone battery.

The Riverside stadium is about a ten minute walk past lots of other landmarks, and there are food and drink stalls everywhere you turn, selling overpriced soft drinks plus beer and cider (almost £5 for a small bottle of beer). The boys rather liked the enormous ‘pretzels’ which were like big hunks of bread for £1.80. The loos were plentiful if basic, and I noticed that all the hundreds of hand dryers had white stickers placed to conceal the brand name. Ridiculous. 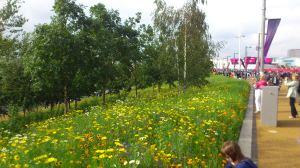 The Riverside is an enormous mass of scaffolding poles with seats that go rather high for those with vertigo. The pitch is a bright blue ‘water based’ one (my son had to explain) with pink borders and it worked very well with the yellow ball. It was an 80s-style dayglo extravaganza. We watched Argentina get beaten by the USA and the Aussies thrash the Germans. The atmosphere was fantastic. Everyone in the stadium seemed in a great mood and there were lots of Mexican waves. One bonkers Australian mum entertained the crowd with shouts of ‘Aussie Aussie Aussie – oi, oi, oi!’

By the time the second match started it was dark, and the stadium and all the various landmarks were all lit up against the new London skyline with an almost full moon too. It was quite magical to be there.

Leaving was easy, and the Javelin train was working well (it took six minutes to get back to St Pancras International, just across the road from King’s Cross). Sadly the train back to Letchworth was dirty and dilapidated, and the cheaper-than-usual first class tickets I’d invested in were useless as the one carriage was full and the boys had to sit on the floor. 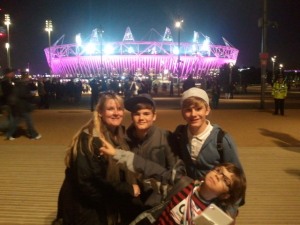 However, it was a great day and despite my reservations I’d highly recommend you make the effort to keep trying for tickets if you have none. It’s not cheap though. Our four tickets cost £20 each. The train was about £40. Food and drink (you can’t take liquids in but there are water points) cost another £60 quid or so. And the boys were given ‘extra’ pocket money on the day, which of course, they spent on sweets . . . in WH Smith on the way home.

Back from festival in Dorset, off to the Olympics

Not much posting recently; we’ve been on holiday at Camp Bestival in Dorset (review to follow).
And after catching up on sleep in real beds, having much needed showers and unpacking (sort of), we’re off again tomorrow to the Olympics. The boys and I, (Bloke has gleefully opted to spend the day dossing at his parents’ with our four year old daughter as we could only get four tickets) are off to watch women’s hockey at 7pm.
I’ve now got to work out what we can take and what we can leave behind. Only one small bag for the day which can fit under the seat. No liquids, no branding, enough clothing to cope with anticipated showers, blazing sunshine and evening chill (our match starts at 7pm).
So, much like packing for last week’s camping then.
I’ll try and blog during the day, phone signal permitting…

We’d decided not to bother with the Olympics, but somehow we’ve got tickets

HAVING decided it was all a big waste of money, how unfair it would be not to take all of the kids and that we’d be better off watching it at home, we’ve actually got four tickets to the Olympics.

We had failed to get any in the previous ‘rounds’, but we’d had an email last week giving a last chance to fork out £20 or more per person to see early rounds of events like cycling, swimming and, er, Greco-Roman wrestling.

Bloke and I had decided that getting up at 7am on a Sunday – again – was ridiculous, and that all the tickets would go to those with faster broadband and an actual interest. To be honest, we didn’t feel was worth swapping a much-needed lie-in for.

Bloke would never turn down the chance to see weird masked figures in white bloomers chasing each other with swords (fencing), and our sport-mad boys really wanted to go, but was it really worth applying when we were limited to a maximum of four tickets, for one single event? Forking out £86 before you even factored in the train fare? Bah, Olympics-shlimpics.

Checking email much later, and quite possibly because I’m too stubborn to admit defeat, I stuck in a speculative request for the hockey, the only sport I thought we would agree on. Four tickets, when we’re on holiday anyway (and not going anywhere).

This time the computer tells you straight away if the tickets are available. After two tries, it let us have four for the earliest rounds of the women’s hockey, on a Tuesday, at 7pm. No idea who’s playing, but we’ll be there. If we can think of a simultaneous adventure for Billy and Bonnie that is.

Tickets for those who missed out previously are on sale until May 17, and if there are any left they go on sale on May 23. You might as well try, as you can always sell them back if you can’t get a babysitter. Apparently.