Go and be nice to Phylip at Cottesbrooke

THERE’S a lovely garden at Cottesbrooke, just north of Northampton, which never seems open frequently enough for you to see the stirling efforts of the lovely head gardener Phylip Statner and his team.

However there’s a chance to go and raise some cash for charity when Cottesbrooke opens on Sunday 17th April from 2pm until 5:30pm for the National Gardens Scheme (NGS).

Primroses and daffodils will be on display and they would normally have gone over when the gardens officially open in May.

The real treasure is the Wild Garden, which is full of bulbs and banks of primroses and offers a haven for wildlife in a tranquil setting. There are also more formal gardens and 3,000 tulip bulbs have been planted in the statue walk.  There are also a number of Magnolia trees in bloom and blossoming cherry trees, all doing rather well after the cold cold winter.

Gay Webster,  joint county organiser for the NGS said: “The Wild Garden is in a magical setting along the banks of a stream, where the massed primroses cheer the spirit after a long, hard winter.”

Refreshments will be available and free parking is included in the admission price.  Visit www.cottesbrookehall.co.uk for more info.

My own little snowdrop 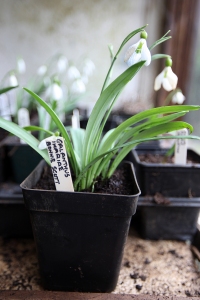 MY three-year-old daughter Bonnie has already achieved something I probably never will. She’s had a plant named after her. Galanthus Ikariae ‘Bonnie Scott’ to be precise. A snowdrop.

I’m incredibly touched that a local galanthophile (that’s snowdrop collector to you), Jim Leatherland, chose to call this new type of snowdrop after Bonnie.

He told me he intended to name one after her just after she was born in February three years ago, but had to wait to see that the new markings came true for a couple of years before ‘going public.’

We went to Jim’s National Gardens Scheme open day at the weekend and despite the rain there were over 100 people who came to look at over 200 kinds of these tiny flowers. And although Galanthus Ikariae Bonnie Scott has now gone past its flowering best, we have a pot of them ‘in the green’ which can be planted out now to flower next year and hopefully, many years to come. 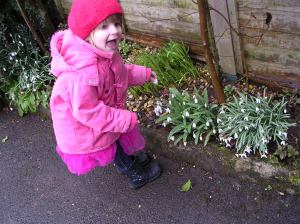 Meanwhile, Bonnie seemed fairly nonchalant about the fact she shares a name with a flower and spent her time trying to pull the heads off Jim’s other pretty snowdrops. No green fingers just yet then. . .

Noted galanthophile Jim Leatherland opens his private garden in Hollowell, north of Northampton (up Church Hill, follow signs) tomorrow, Sunday February 27, between 11am-3pm.
If snowdrops are your passion, there are over 200 different types and you can also buy some ‘in the green’ to plant up at home. All in aid of the National Gardens Scheme (NGS) charity.

A short drive away over at Coton Manor Gardens, you can catch the last Snowdrop and Hellebore open day with admission at £3.