Then attached new straps received in post from HotBin HQ which should keep tighter seal.
They are very strong, I’d advise threading first then looping over bin before tightening. I’ve trimmed mine after fixing as they are very long.

Hotbin has been a little neglected. Needs emptying and new straps putting on. 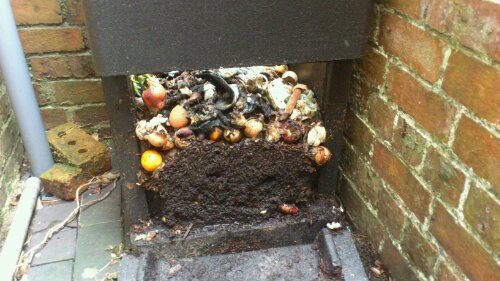 Pink bin top recent layer, purple is compost but with some lumps of unaltered cauliflower and leek!

Loads of brandling worms, so not really been keeping consistently hot. I blame weather and lack of prunings to keep topped up.
Worth saying that’s ALL our kitchen waste – household of six – since January!

Remember that Hotbin I had delivered at New Year? see here
It’s currently operating at 90 degrees and scoffing just about every thing I can chuck in it.
After a rather slow start, mostly because I thought you had to get the temperature up before putting much in, I took the advice of the manufacturer and started filling it with kitchen waste in earnest.
This happened to coincide with our council deciding to give us all a food waste bin (although our area still has to put out black bin bags, go figure).
So instead of our food waste sitting stinking up the yard, we have been putting about two small worktop binfulls of food waste in the hotbin every couple of days. A load of grass clippings about a fortnight ago also helped, and I’m told chicken pellets also speed things up.
The bin simply devours it. I haven’t actually managed to get it more than half full because each day the level drops. When you consider there are six of us in the house, that’s a lot of food waste.
As well as veg peelings I’ve just started putting cooked food in, and haven’t quite been brave enough to put bones in yet. Maybe this week.
My biggest mistake was to keep looking at the thermometer on the lid, which never rises above 30. Meanwhile, inside the temperature, using the extra thermometer provided, is far hotter, and today showed 95 degrees!
It’s a little smelly, only when you lift the lid and no more than a normal compost heap.
Unlike a normal heap, which just piles up and takes a year or more to break down, and needs a mix of material, the HotBin is right outside the kitchen door, on concrete, in a shady corner. But it’s doing an awesome job.

I’ve just loaded my base layer into my new HotBin. Unusually for a compost bin, it’s sited outside our shady basement backdoor on concrete.

This new bin doesn’t need sun or a soil base for worms to crawl up. It works on bacterial heat.
But the real revelation is that it claims to compost cooked foods, including meat. Therefore seriously reducing your weekly waste while producing compost for your plants.
Here’s the clincher: it says it will produce useable compost in 30-90 days. That’s about a year faster than my bog-standard compost heap.
The HotBin in also manufactured in Northampton, my home town, so I’m particularly hopeful it works.
The base layer is just 30cm deep of your own compost (a bag from the

garden centre will do). Then when it reaches over 25 degrees (thermometer in the lid) you can start adding all food waste, with a handful of wood chips for bulk.

I’ll keep you up to date with how our six-person family copes.